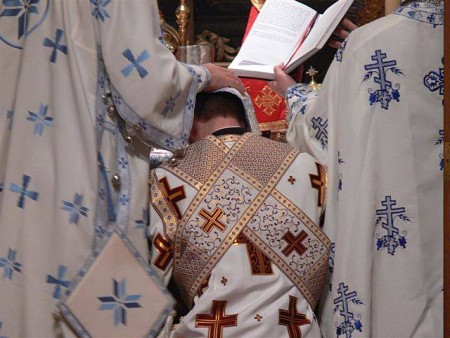 ORDINATION OF DANIEL KIRK TO DEACONATE

Alhambra, CA - On the Eve of Theophany, Saturday, January 18th, at the Saint Steven's Serbian Orthodox Cathedral in Alhambra, California, His Grace, Bishop Maxim, during the Divine Liturgy, ordained to the Deaconate, Reader Daniel Kirk of Butte, Montana. Also concelebrating the Diving Liturgy were V. Rev. Nicholas Ceko, Rev. Norman Kosanovich, and Rev. Russell Radoicic of the Holy Trinity Church in Butte, Montana. Following the Divine Liturgy and the ordination of Deacon Daniel, His Grace, the Clergy, and newly ordained Deacon Daniel together with the faithful processed outside for the Blessing of the Water. Following the service a small celebratory luncheon was held for Deacon Daniel Kirk, his wife Anne, and their daughter Phoebe. Deacon Daniel and his family will return to Butte, Montana where he will be the parish Deacon at the Holy Trinity Church.

The photos below are from Theophany Eve on Saturday, January 18th and Theophany on Sunday, January 19th, taken at the Saint Steven's Cathedral in Alhambra, California.