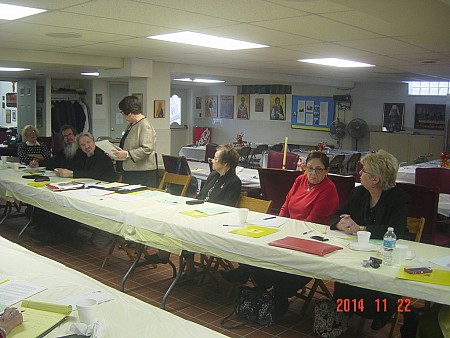 KSS Federation Officers include: Millie Radovick-President; DeeDee Baskot-Vice President; Martha Springborn-Vice President and Secretary and Barbara Topich-Treasurer. The Federation is composed of member Kolos from throughout the Diocese.

The Kolo Federation is engaged in a number of activities benefitting the Eastern Diocese of the Serbian Orthodox Church and has impact well beyond the geographic boundaries of the Diocese.

The Federation is instrumental in the operation of the St. Sava Camp at Shadeland, the annual Diocesan Day celebration held at Shadeland, and the St.Nikodim Chapel Slava at the Episcopal Headquarters.

The Federation has been active in supporting Clergy seminars at Shadeland and Winter Retreats for youth of the Diocese. The Federation directs supportive assistance to Monastery Marcha, International Orthodox Christian Charities and Lifeline as well as other charitable projects.

The officers and members of the Federation are deeply committed to the Serbian Orthodox Church and give freely of their time and efforts. Representatives of member parish Kolos traveled to participate in the meeting in Carmichaels.

The KSS Federation celebrates the Feast of the Dormition of the Mother of God as the organizational Slava. Episcopal Deputy Very Reverend Stavrophor Dragoljub Malich serves as the Federation’s spiritual advisor.

President Millie Radovick chaired the current meeting. She reviewed and addressed past, current and future work of the Federation. Financial reports were presented and plans for future projects and activities were discussed.

The St. George Kolo was honored and pleased to host the meeting and offered to host the Federation’s Slava in 2015. The Eastern Diocese Federation deserves recognition for the continuing good work benefitting the Diocese.