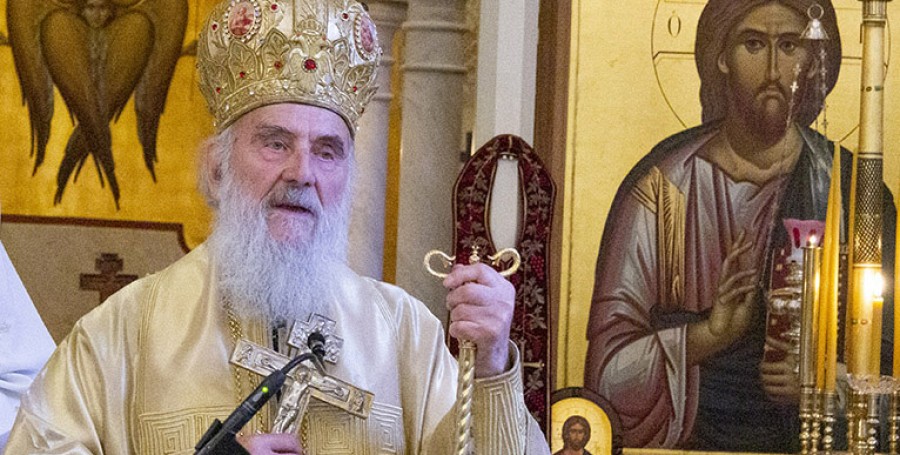 The Archbishop of Pec, Metropolitan of Belgrade-Karlovci and Serbian Patriarch (Gavrilovic) reposed in the Lord in the Military Covid Hospital "Karaburma" in Belgrade, on Friday, November 20, 2020, at 7:07 AM.

All other details regarding the funeral of His Holiness the Patriarch will be announced soon. Eternal memory and the Kingdom of Heaven!

His pious parents Zdravko and MilijanaGavrilovic from the village of Vidova near Cacak - and with them the entire Serbian family - were blessed the by the Lord, on August 27, 1930, with the birth of a male child whose baptismal name was Miroslav. He finished elementary school in his native village and high school in Cacak and the Theological School in Prizren, Kosovo and Metohia. Thereupon he graduated from the Faculty of Theology in Belgrade.

After completing his military service, he was appointed professor of the Prizren Theological School, but before accepting the appointment he received monastic tonsure in the monastery of Rakovica, n. Rakovica, by the Serbian Patriarch German, receiving the monastic name Irinej, inOctober 1959. On the Holy and Great Friday of the same year, he was ordained a hieromonk in the church of Ruzica, Belgrade. As professor at the Prizren Theological School, he spent some years at postgraduate studies in Athens. He was appointed principal of the Monastic School in the Ostrog monastery in 1969, from where he returned to Prizren to the position of Principal of that famous Theological School.

The act of enthronement of His Holiness Irinej, Archbishop of Pec, Metropolitan of Belgrade-Karlovci and Serbian Patriarch, was performed on January 23, 2010, during the Holy Hierarchical Liturgy in Belgrade’s Cathedral church of Archangel Michael. The solemn Liturgy was officiated by the elected Serbian Patriarch Irinej with the concelebration of his brothers Bishops, priests and deacons, as well as representatives of the Russian and Greek Churches. Patriarch Irinej was formally enthroned to the ancient throne of the Serbian Patriarchs in the Patriarchate of Pec monastery on 3 October 2010, with participation of the representatives of all sister Orthodox Churches.

From the very beginning of His Patriarchal Ministry, though in very difficult time, His Holiness advocated peace and stability in the entire region.

On November 10 2010, he stated in an interview that "the Drina River [between Serbia and Bosnia and Herzegovina] is not a border, but a bridge that connects us. Although, in a way, we are one even today, God willing, we will soon really be one." Patriarch Irinej elaborated that for now "it is enough that we are one as people, as the Orthodox Church, and that we are on the same path of St. Sava and Christ". He praised the Serbs of Banja Luka stating that "[they fight] to preserve the Serbian name. Although this is not at all an easy task, they are succeeding."

On December 15th 2011, His Holiness was decorated by His Royal Highness Prince Davit Bagration Mukhraneli Batonishvilli of Georgia with The Grand Collar of The Order of The Eagle of Georgia and The Semeless Tunic of Our Lord Jesus Christ.

His Holiness Irinej has been considered, both abroad and at home, as a moderate traditionalist, open to global inter-religious dialogue. In an interview he indicated he would not oppose the first-ever visit by the Roman Catholic Pope to Serbia in 2013 as part of celebrations of the 1,700th anniversary of the Edict of Milan, the law under which Roman emperor Constantine, who was born in Niš, ended the persecution of Christians. His Holiness said that "there is the wish of the Pope" for a meeting in Niš and that it would be a chance "not just for a meeting, but for a dialogue".

Regarding the accession of Serbia to the European Union, the Serbian Patriarch said that: "Serbia should not look with suspicion at the EU, if the EU respects the Serbian identity, culture and religion. We believe that we are an historical part of Europe, and we want to be in this family of peoples. In the accession we will accept everything that is not in contradiction with our cultural and historical identity.”

As the Head of the Serbian Orthodox Church His Holiness represents the highest spiritual authority among the Serbian people in Serbia and abroad.

Serbian Patriarchate under His leadership has published an exceptional number of academic, liturgical, religious, as well as popular books for education and spiritual uplifting of the faithful. His Holiness is well known as a great preacher and uses every opportunity to preach the Word of God to all people. Most recently, the Diocese of Nis has published a collection of his sermons delivered in the Dioces of Nis, while he was Diocesan Bishop there.

His Holiness Serbian Patriarch Irinej paid an irenic and canonical visit to His All-Holiness Ecumenical Patriarch of Constantinople Bartholomew immediately after his enthronement;
He participated in the celebration of the 1250thanniversary of baptism of Russia in 2013;
He paid an irenic and canonical visit to the Patriarchate of Alexandria and All Africa in October 2012;
In 2013 He paid a visit to Mount Athos and Monastery Chilandar;
He led an Interreligious delegation from Serbia that participated in the second Inter-religious dialogue in Jakarta in October 2013, at the State-level between Serbia and Indonesia;
He actively supports the Inter-Christian dialogue between Christian denominations of East and West and communicates with Heads, Leaders and Church Dignitaries of other confessions and religions at the highest level;
In May 2014, upon the invitation of His Beatitude Anastasios of Albania, His Holiness Patriarch Irinej visited Tirana at the occasion of consecration of the Cathedral church of the Holy Resurrection;
In October 2014 His Holiness Serbian Patriarch Irinej hosted the Pan-Orthodox 1700th anniversary of the Edict of Milan in Nis, Serbia, the birth-place of Emperor Constantine.
Serbian Patriarch Irinej took an active part in the Pan-Orthodox gathering in Constantinople in March 2014, when it was decided to begin with preparations for a Great and Holy Pan-Orthodox Council to be held in 2016.