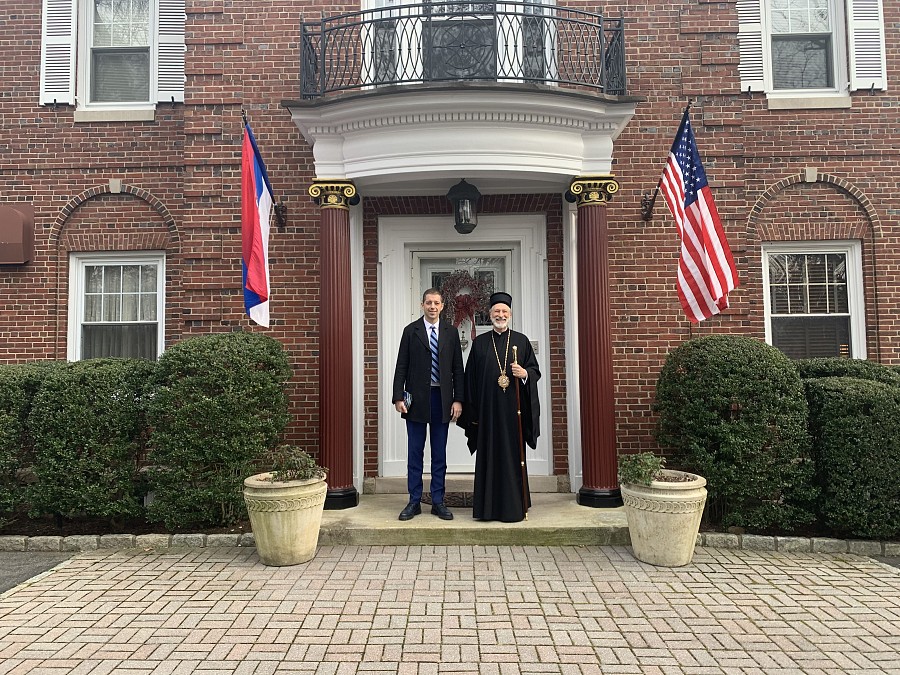 On the eve of New Year, according to the Julian Calendar, January 13, 2021, His Grace Bishop Irinej of Eastern America formally received at the Episcopal Residence and Diocesan Center in New Rochelle, New York, His Excellency Marko Djuric, newly arrived Ambassador of the Republic of Serbia to the United States of America.

In a very amiable exchange of information and ideas for cooperation between the Serbian Diplomatic Representation and the Serbian Orthodox Dioceses in the USA, among the many, two significant anniversaries stand out in this new year, 2021.

In particular, this year marks an important milestone for the United States of America and Serbia. Notably, we celebrate the 140th Anniversary of the establishment of diplomatic relations between our two countries.

In 1881, with the rise of modern nations, slightly more than two dozen at the time, our two countries were already exchanging envoys, trading goods, and signing significant international treaties, a number of which are still in place today.

We take great pride in the fact that during both World Wars, relations between Serbia and the United States remained steadfast. As Allies, we fought for freedom and values held in common by our two nations. Faced by difficulties at home, many freedom-loving Serbs have made their home in the United States of America.

American Serbs have positively impacted upon and enriched the history of their new Homeland, while bearing their Fatherland in their hearts. This noble patriotic tradition continues to enrich the very fiber of both countries.

As a Church, this present year, 2021, represents another milestone, namely, the 100th Anniversary of the establishment of the first Serbian Orthodox Diocese in the USA and Canada. Our ecclesiastical history is also a very rich history, blessed by the appointment of the Holy Bishop Nicholai of Zhicha and Ochrid as the first Administrator of the then nascent Diocese, which was founded at his intervention. Thereafter, the first Bishop of America and Canada was St. Mardarije of Libertyville. Thus, the inception of our Church in the Americas began at the hands of two contemporary saints.

The Ambassador and the Bishop exchanged customary gifts, each gift reflecting the standing Anniversaries of the Church and of the Nation, as signs of mutual respect and forthcoming cooperation.