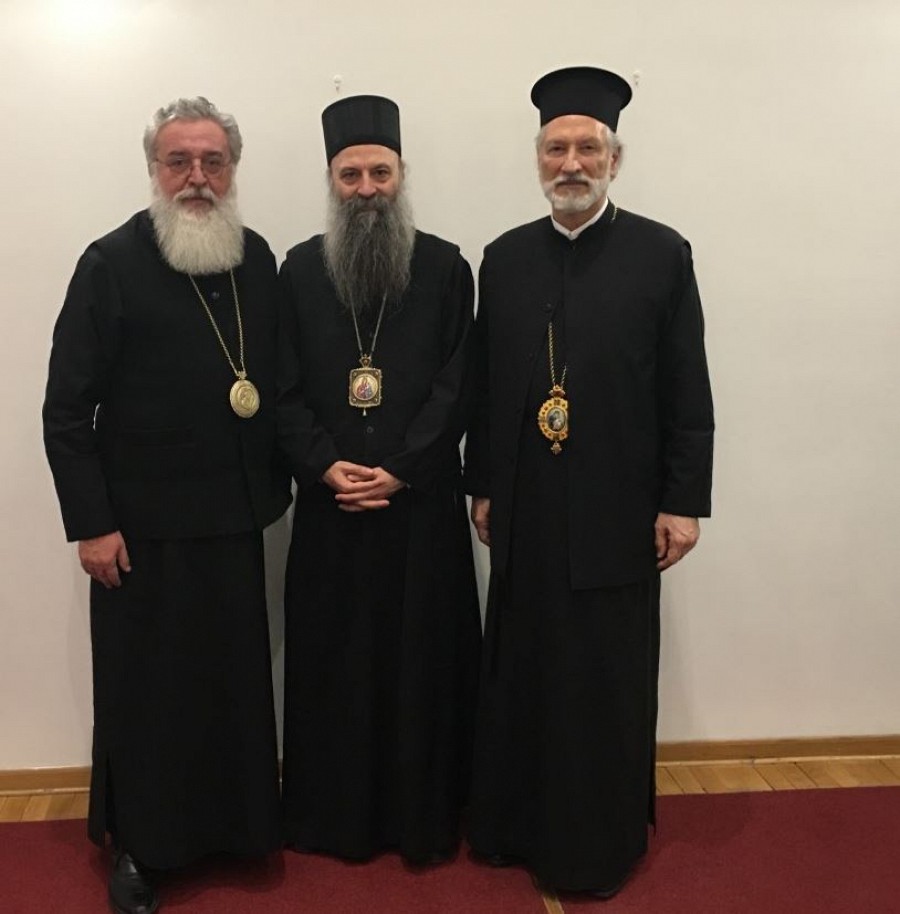 The Holy Assembly of Bishops elected His Eminence Metropolitan Porfirije of Zagreb-Ljubljana, PhD, as the new Serbian Patriarch, in its convocation in Memorial Cathedral of Saint Sava in Belgrade on 18 February 2021.

Immediately after the election a thanksgiving service was officiated and  Many years was chanted to the Archbishop of Pec, Metropolitan of Belgrade-Karlovac and Serbian Patriarch Porfirije. Bells at Saint Sava Cathedral in the Vracar district of Belgrade rang a few minutes before 4:00 pm indicating that the 46th Patriarch of Serbia was elected.

O,  Lord, grant His Holiness Serbian Patriarch Porfirije to Your  Holy Church in peace, safety, honor, health, length of days, and that he may rightly dispense the word of Your Truth! Axios! For many years!

Newly-elected Metropolitan Dr. Porfirije (Peric) of Zagreb-Ljubljana was born on 22 July 1961 in Becej, northern Serbia, and was baptized as Prvoslav. He finished primary school in Curug, and the “Jovan Jovanovic Zmaj” Grammar school in Novi Sad. He was ordained a monk according to the rite of small schime by his spiritual father, then hieromonk Dr. Irinej (Bulovic), at Decani Monastery in 1985.

He graduated from the Faculty of Orthodox Theology in Belgrade in 1986, when the then Bishop of Raska-Prizren Diocese, future Serbian Patriarch Pavle of blessed memory, ordained him a hierodeacon at the monastery of Holy Trinity in Musutiste, Kosovo and Mectochia.

He attended postgraduate studies in Athens from 1986 until 1990. That year, upon the blessing of Bishop Dr. Irinej of Backa, he joined the monastery of Holy Archangels in Kovilj, near Novi Sad, where he was ordained as hieromonk and became its abbot.

Many young monks and novices came to the monastery following him. These were the years when the Kovilj Monastery became a spiritual center for many young people: intellectuals, artists, popular actors and rock musicians, especially from Novi Sad and Belgrade. Since then abbot Porfirije has particularly dealt with drug-addicted patients. For this purpose he formed (in 2005) a therapeutic community called “The Land of the Living”, which is recognized as the most successful project for therapy  of drug-addiction; under the leadership of Bishop Porfirije, it has more than hundred residents in camps throughout Serbia at the time being.

During the ordinary meeting of the Holy Assembly of Bishops of the SOC in Belgrade on 14 May 1999 he was elected as Bishop of Jegar, Vicar of the Bishop of Backa.

He defended his PhD thesis Possibility of knowability of God in St. Paul’s understanding according to the interpretation of Saint John Chrysostom at the Faculty of Theology of the University of Athens in 2004.

Bishop Porfirije has not been just president of the Steering Board for a decade, but a real spiritus movens of the Humanitarian Fund “Privrednik”, which has provided scholarships for a great number of gifted, but poor pupils and students, regardless of nationality or religious affiliation.

The Holy Assembly of Bishops entrusted him to establish military chaplaincy in the Serbian Armed Forces in 2010.

His expert theological works Bishop Porfirije published in magazines both in Serbia and abroad. He participated in quite  a number of scientific conferences and symposia throughout the world.

He was enthroned on the throne of the Metropolitan of Zagreb and Ljubljana on July 13, 2014 in the Cathedral Church of the Transfiguration of the Lord in Zagreb. The solemn Hierarchal Liturgy was served by Serbian Patriarch Irinej, accompanied by a large number of archbishops of the Serbian Church and other sisters Churches, as well as priests and monks, and pious people.

The Holy Assembly of Bishops elected His Eminence Metropolitan Porfirije of Zagreb-Ljubljana, PhD, as the new Serbian Patriarch, in its convocation in Memorial Cathedral of Saint Sava in Belgrade on 18 February 2021. Immediately after the election a thanksgiving service was officiated and  Many years was chanted to the Archbishop of Pec, Metropolitan of Belgrade-Karlovac and Serbian Patriarch Porfirije.