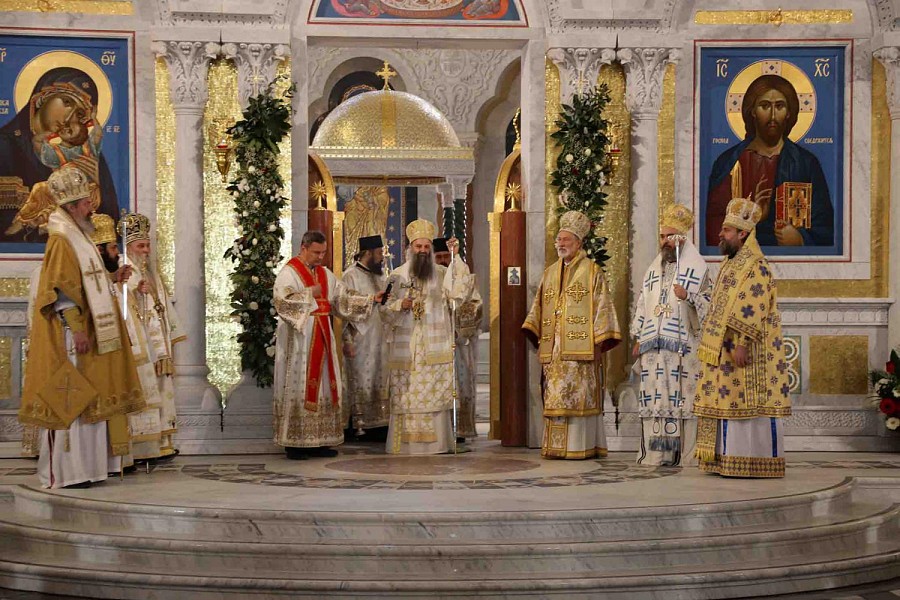 In the past few days, hundreds and hundreds of letters of congratulations have arrived at the Patriarchal Palace in Belgrade addressed to the Serbian Patriarchate, the Holy Assembly and the Synod, all Serbian Orthodox race, and of course the newly elected first hierarch of the holiest Serbian Orthodox Church, Archbishop of Pec, Metropolitan of Belgrade and Karlovci, and Serbian Patriarch Porfirije.

Leaders and dignitaries of the Orthodox Churches, the highest representatives of the Roman Catholic Church, the Islamic Religious Community and the Jewish Religious Community, some Protestant Churches and denominations, the highest representatives of the authorities of the Republic of Serbia, statesmen and important political figures wished the head of the Serbian Patriarchate good luck on the throne of Saint Sava. His Holiness Porfirije read the congratulations of our Orthodox people from Serbia, Republika Srpska, Montenegro, Croatia, Northern Macedonia, but also from Europe, North and South America and Australia with the greatest love and attention.

On this occasion, we will list only the most important heads of the Orthodox Autocephalous and Autonomous Churches, religious dignitaries and representatives of states and important institutions. Congratulations were sent by the patriarchs: Bartholomew of Constantinople, Theodore of Alexandria and all Africa, John of Antioch and all East, Kirill of Moscow and all Russia, Neophyte of Bulgaria, Daniel of Romania; then archbishops: Chrysostom of Cyprus, Ieronymos of Athens and all Greece, Anastasios of Tirana and All Albania, Metropolitans: Savva of Warsaw and all Poland, Rastislav and the Czech lands and Slovakia, Onufry of Kiev and all Ukraine, Tikhon of America and Canada, Hilarion of America and New York, head of the Russian Orthodox Church Abroad; Archbishop Leo of Helsinki and all Finland.

Congratulations from the abbots and abbots of Orthodox monasteries from the Holy Mount Athos and the whole of Orthodoxy also arrived; deans and rectors of Serbian Orthodox educational institutions, but also of Orthodox faculties and seminaries throughout the Orthodox universe; presidents and officers of Serbian church and church-school municipalities from the homeland and the diaspora.

Congratulations to His Holiness Porfirije was addressed by Pope Francis and other most important dignitaries of the Roman Catholic Church, among them Cardinal Kurt Koch, President of the Pontifical Council for Promoting Christian Unity; Archbishop Vicenza Paglia, President of the Community "St. Egidio"; Archbishops: Cardinal Josip Bozanic of Zagreb, Cardinal Vinko Puljic of Vrhbosna, Cardinal Stanislav Hocevar of Belgrade, Marin Barisic of Split-Makarska, Zelimir Puljic of Zadar, Mate Uzinic of Rijeka, then bishops: Antun Skvorcevic of Pozega, Stanislav Zore of Ljubljana, President of the Slovenian Bishops' Conference, and many Protestant bishops and prominent leaders of the Christian world in Europe and the world.

Hundreds of congratulations to his patriarch and father, His Holiness Porfirije, they came from the pious Serbian people from all over the world.