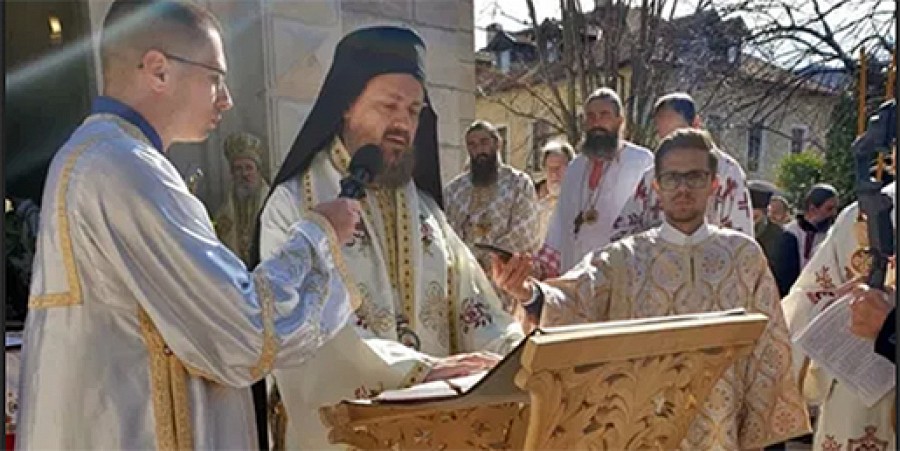 The Bread of Life, New Pascha and the Land of the Living: The Eulogy from Bishop Maxim at the funeral of Hierarch Atanasije in the Trebinje Cathedral, March 6th, 2021

Gospel of St. John 6:48-54: “I am the bread of life. Your fathers ate the manna in the wilderness and are dead. This is the bread which comes down from heaven, that one may eat of it and not die.” If we ask ourselves which gospel words best fit this liturgical commemoration in front of the coffin of the unforgettable Bishop Atanasije, then these are precisely the words of the Lord from today’s Gospel.

Your Eminence, Most reverend hierarchs, honorable choir of presbyters and deacons, and pious fullness of the Church,

If there is a moment in time when these words of the Lord take on full meaning, then it is this present moment of the Divine Eucharist. Through the synergy of the Holy Spirit, the celebration of the Metropolitan of Dabro-Bosnia, the concelebration of hierarchs, presbyters and deacons, the participation of the people of the local Church and those who have come from afar, we have become “one flesh, for we all partake of the one bread” (1 Cor 10: 16-17).

At the same time, Herzegovina and the whole Church are mourning and rejoicing in the festive atmosphere. The great hierarch, Bishop Atanasije, gathers everyone because as a relentless sower of the Word of God, he points everything to Christ who descends from Heaven like Bread to feed and comfort all present.

But what do these words mean?

I am the Living Bread which came down from heaven. If anyone eats of this bread, he will live forever; and the bread that I shall give is My flesh, which I shall give for the life of the world.

Let us note that man feeds on the God-Man, that food for all eternity which as Bishop Atanasije testified, is the only food worthy of human desire and human nature. That is why the life of Atanasije was a life in the grace of the Liturgy, in which we experience life and death, as well as meetings and partings, as a blessing. He himself lived so that his presence was a blessing to all—both before and now, when he passed away.

He taught everyone how to live, how to wash, how to eat—both the daily bread and the “Bread coming down from Heaven.” And when he left, he did not leave a void, nor any shadow, but only light and health that establishes and nourishes everything. Our Bishop ran the race, a good war of wars and the victory of victories!

Throughout his life—by officiating and writing about the Holy Liturgy—Atanasije testified that the God-Man Christ is always and again our new Pascha and the Land of the Living.

The Jews therefore strove among themselves, saying how can this man give us his flesh to eat?

The Jews used to quarrel among themselves, and even today, some who do not understand Atanasije’s liturgical legacy quarrel.

What is the reason for that? In order to join this legacy, you need to adopt a different logic of liturgical life and repentance as “the most beautiful flower of human honesty.” Atanasije did not gather supporters and admirers. “God created Atanasije and… the mold breaks,” said Metropolitan Amfilohije truthfully and wittily, testifying to the uniqueness of our late Hierarch.

Above all, Atanasije’s life’s work consisted in preaching and testifying to the truth and beauty of Christ’s Person. This Person has revealed and showed to us the truth about the Triune being of God, about what God is, as He has always existed, as personally, as the Triune Existence as Father and Son and Spirit.

Given the loud testimony, Atanasije was a kind of “sign that was spoken against” (cf. Luke 2:34) at every step. He was spoken of as “contradictory,” so that some praised him, others scolded him, and still others looked at him in confusion, in constant doubt; some, like children, he attracted like a magnet and some he rejected. There was a “harmonious paraphony” in the personality and work of this Christian theologian, that paradoxical cooperation of universal Christian spirituality and concrete folk life and historical experience. The mediocre spirits that Atanasije could not fit into his standards were too “small to stand in his tormented sigh,” according to a verse by a Greek poet.

Then Jesus said to them, “Most assuredly, I say to you, unless you eat the flesh of the Son of Man and drink His blood, you have no life in you.”

Bishop Atanasije had life in himself, life in abundance. So much so that others would ask “where does he get so much strength?” But this life of which the Gospels speak is not some pulsating energy, but life in Christ for our neighbor, a life of sacrificing.

“A living life”, one of his frequently repeated phrases which Atanasije, in his voice turn would turn to a rough, deep bass, would say as a message to his contemporaries. But, in what manner would he do it? This man who had amazing energy and a work ethic, combined the Christian consciousness with the epic, and as one of the most important educators of modern time, he combined that traditional morale with the eternally new Christian ethos.

But the most convincing proof of Atanasije’s life in Christ was his participation “in the communion of suffering.” This hieromonk was the first among Serbian priests, publicly and on the spot, to serve the funeral service for victims of the Nazi and communist terror. He advocated that these victims, as well as those of the Ustasha, ​​be identified, that they be buried with dignity and inscribed in the living book of our people’s memorial and forgiveness. Just as he visited the destroyed churches and ditches of new martyrs throughout Bosnia and Herzegovina, Slavonia, Serbian Krajina, Kosovo and Metohija, he also visited Europe, America and Australia, where he went to offer comfort to Serbian parishes but also other Orthodox parishes as well…

Because of this vigilant monastic and episcopal conscience of bishop Atanasije, as well as Christian courage, Patriarch Pavle of blessed memory once said: "I sign everything that Atanasije writes… although not everything he says." His spiritual father, Abba Justin of Celije, once said something to a young man that expresses our Elder of Hercegovina even more: “Listen to Father Atanasije because he lives the way he speaks.” Atanasije’s “heroic study of the Holy Fathers” was, according to Abba Justin, important in light of the way of St. Sava: “Through it a new sky over the Serbian lands was built.”

The Gospel pericope ends with the following words: He who eats My Body and drinks My Blood has eternal life; and I will raise him up on the last day.

There then, is the goal of the Heavenly Bread and the Divine Liturgy; it is able to feed the universe with the joy of the Resurrection which has victory over death. In that is the glory of Christ and for this reason do we await the resurrection, “in the last day”. When he said goodbye to his spiritual children on October 28, 1968, in the gallery of the Russian Church, leaving Athens for Paris, the nun Melania noted that Atanasije said: “In my mission, my goal and aspiration is only the glory of Christ. I don't want anything else. And I ask God to anathematize me if I were to desire anything else but the glory of Christ… If all eternity is lost and with it all eternities, I will remain with Christ and He will be victorious”.

During his sixty years of the priesthood, it was evident that Bishop Atanasije lived by these words and that he really was a Christ-like priest-theologian, whose theological flute does not cease to resound in the Church of Herzegovina and throughout the world, as the Romanian Patriarch Daniel wrote yesterday. Atanasije achieved this first of all because he was the true leader of the Divine Eucharist in which he continued the apostolic fatherhood and succession as a service of redemption of the People of God from destruction and death.

For that  reason, the Lord welcomes today His faithful servant into His arms. His mother Savka and father Milan rejoice; the new martyrs of Kosovo-Metohija, Glina, Jadovina and Jasenovac, Prebilovac and Herzegovina are rejoicing, on whose behalf he offered his laments in difficult days.

What we see before our eyes today, this fullness of the people in the Liturgy in Trebinje gathered near the coffin of the Elder of Herzegovina, cannot but remind us of the presence and work of Bishop Atanasije from 1992 in this suffering but glorious diocese of Saint Sava.

Here are also the children to bid farewell to the eldest child among them, bringing him flowers and earth from Gazimestan. This man of a rough physiognomy but mild soul knew how to criticize those around him at times, but also to tremble while preaching about the meaning of the biblical and folk words (like the name Žitomislić), not failing to present himself as the leader of those of “dumb children.” We ask him to forgive us if we have sometimes sinned against him!

Finally, the Ambon directs its word to you. It considers its duty to express the gratitude of the Church for what is being done in this City today, with Your blessing. We wish You, dear Bishop, that Your work be and remain in the spirit of Bishop Atanasije, in the most excellent sense of that word, and that His intercessory prayers to God protect and strengthen the pious people for the good of the entire Church and all people. Let his presence in the Tvrdos Monastery and Herzegovina serve as a source of sanctification, strength, and hope for Your flock, but also for all those who come here to express their respect for Atanasije who renewed Herzegovina and fed it with his wisdom. Amen.