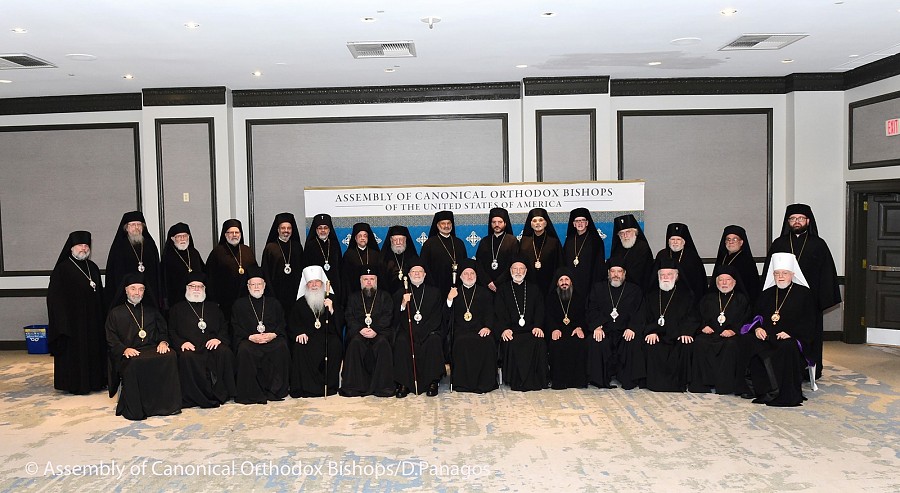 The Assembly of Canonical Orthodox Bishops of the United States of America convened in person for the first time since the beginning of the COVID-19 pandemic, in Washington, D.C. October 2-5 for its 10th Anniversary Meeting. This is the first in-person meeting presided over by Archbishop Elpidophoros. Twenty-nine Hierarchs participated in-person and were joined by seven Hierarchs who participated virtually. In their opening session, they called to mind the losses suffered over the past year and a half, due to the global pandemic, and offered prayers for the continued health and recovery of the faithful and all people.

The events began on October 2nd with a meeting of the Executive Committee. Later that evening, all the Bishops gathered at Saints Peter and Paul Antiochian Orthodox Church in Potomac, Maryland for Great Vespers, presided over by Metropolitan Joseph, Vice-Chairman of the Assembly. A reception hosted by the parish for local clergy and their families followed.

On Sunday, October 3rd, members of the Executive Committee – Archbishop Elpidophoros (GOA), Metropolitan Joseph (AOCA), Bishop Irinej (SOC), Metropolitan Nicolae (ROC), Bishop Saba (GOC), Metropolitan Tikhon (OCA), and Metropolitan Gregory (ACROD) – concelebrated the Divine Liturgy at Saint Sophia Greek Orthodox Cathedral in Washington, D.C. This historic event was the first time the Assembly opened with a concelebration of the heads and representatives of the jurisdictions, fostering the bond of love and communion. The sermon was offered by Metropolitan Tikhon. After the liturgy, they engaged with the faithful during a reception hosted by the parish. 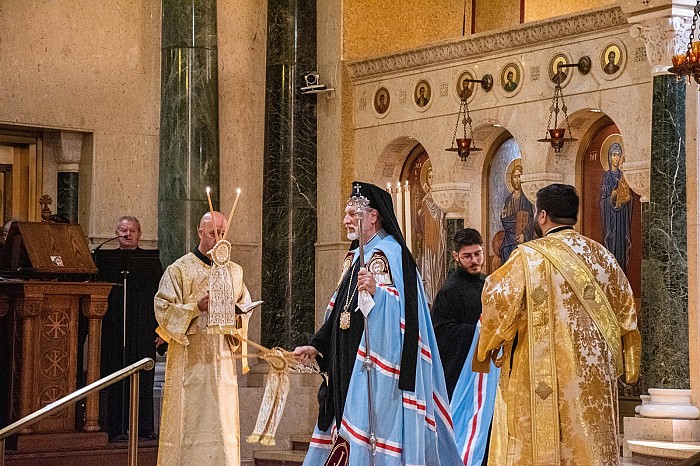 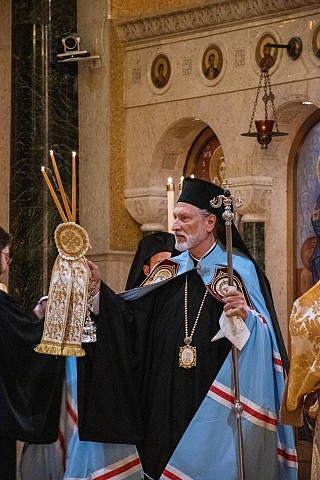 The Bishops then engaged the local faithful at a Networking Charity Event at the Museum of the Bible on Sunday evening, where a panel of youth and young adults presented challenges and opportunities facing the youth today as well as how the Church can support youth in remaining faithful. At the conclusion of the panel, all the participants joined the Bishops in assembling hygiene kits to be distributed by IOCC (International Orthodox Christian Charities) to those in need.

In his opening remarks on Monday, October 4, Archbishop Elpidophoros, Chairman of the Assembly, shared his joy that the Hierarchs were able to gather in person this year, continuing their 10th Anniversary Celebration. He also expressed sorrow at the falling asleep in the Lord since the last gathering of Metropolitan Theodosius of the OCA, Metropolitan Maximos of the GOA, and Archbishop David of the OCA; and joyfully welcomed the new members to their first Assembly meeting. 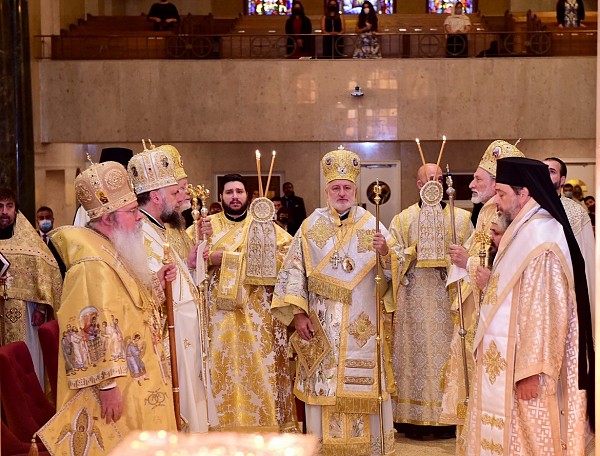 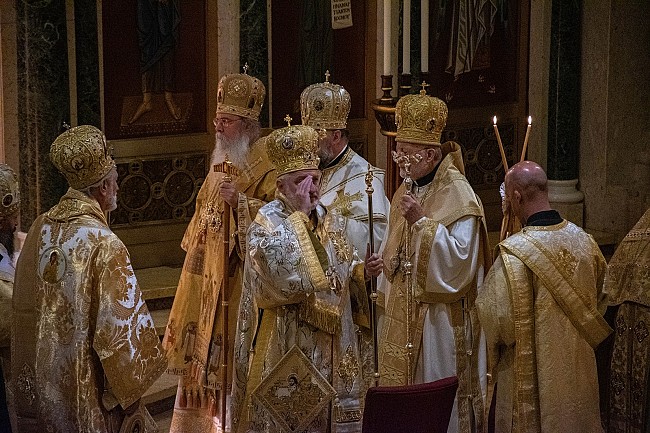 The Chairman spoke about unity in diversity: “Orthodoxy, as we all know, is not a federation of Churches, but a family – a very large global family.” He also spoke about the current climate in America and challenges posed by the culture, and the Assembly’s responsibility to be a unified voice defending the traditions of the Church, while being balanced and above all else pastoral. In order to see the Chairman’s full address, click here.

In 2020, the Hierarchs declared 2021 the “Year of the Youth.” Thus, a highlight of this gathering was the formation of two new transformational Assembly Agencies focused on serving youth and young adults to better address their needs. A pan-Orthodox Agency for Youth and Young Adults will prepare and provide effective resources, programs, tools, and gatherings to assist ministry workers, clergy, parishes and parents in order to form and strengthen future generations of engaged and faithful Orthodox Christians. The new Orthodox Volunteer Corps will respond to the deep desire of our Orthodox young adults to serve others, by providing year-long immersive service opportunities in nonprofit organizations. These two new Agencies will continue the Assembly of Bishops’ focus on youth and young adults.

The Assembly also reviewed the extensive work of its Committees and Task Forces undertaken over the past year and considered committee proposals. The Assembly approved the ongoing work of the Committee for Canonical Matters to continue developing a clergy database, the Committee for Youth’s upcoming Orthodox Camping and Youth Worker Conference to be held in the first quarter of 2022, and the Committee for Chaplaincy’s Institutional Chaplaincy Program. The Mental Health Task Force reported that it will continue its work having completed the Mental Health Needs Assessment Survey by developing program proposals based on the results. 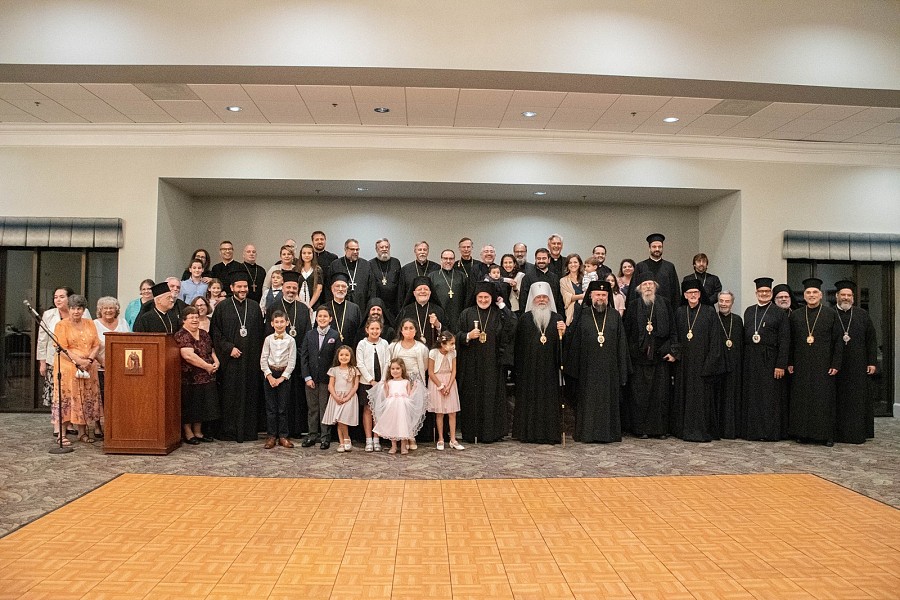 The last session of the meetings examined the North American Orthodox-Roman Catholic Theological Consultation, looking at the past, present, and future of the historic and important ministry.

As the meetings were underway in Washington, D.C., the Assembly acknowledged the joint statement of Ecumenical Patriarch Bartholomew, Pope Francis, Archbishop Justin of Canterbury, Metropolitan Hilarion of Volokolamsk, Rev. Ioan Sauca, WCC Acting Secretary General, and other global faith leaders on the climate prior to the upcoming United Nation’s Climate Conference (COP-26).

Before concluding, the Hierarchs agreed to convene again October 2-4, 2022. They regretted the absence of their Brother Hierarchs of the Moscow Patriarchate and reiterated their invitation to participate in the following Assemblies.