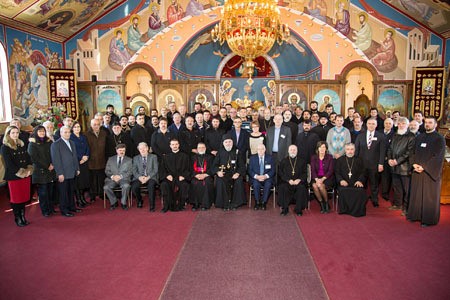 Windsor, Ontario - Clergy, church-school congregation and parish presidents and delegates from throughout Canada, as well as representatives of the diocesan bodies – 83 participants in all - led by His Grace Bishop Georgije of Canada, gathered for three days at St. Demetrios Serbian Orthodox Church to consider the current issues in the life of the Serbian Orthodox Church in Canada.

It was an occasion to focus on the three decades of the archpastoral work of Bishop Georgije who will commemorate three decades of leading the Serbian Orthodox Church in this country on the feast day of the Protection of the Most Holy Theotokos as the first bishop. For thirty years on the episcopal throne he increased the number of clergy fourfold, from the four parishes he inherited in 1984 he multiplied them to thirty-six, and with the consecrations of the two new churches this year – in Calgary in April and Ottawa in the Fall – a wreath of twenty newly consecrated churches will be realized in this Diocese by the bishop of Canada.

The Assembly greeted the decision of the Appellate Chamber of the Supreme Court of Ontario which, only a day before the beginning of the Assembly, dismissed the appeal of the removed church board members from the St. Nicholas Church in Hamilton (Nash Rd) of the verdict of the Supreme Court of Ontario from 2012, thus definitively concluding this long lasting dispute. To remind our readers, in 2012 the Supreme Court of Ontario dismissed all allegations of the removed board members against the Canadian bishop and the Temporary Trusteeship which the Diocesan Council appointed in Hamilton after a group of the then board members attempted to disrupt the Liturgy on the feast of the Dormition in 2005. The verdict expressly states that the Bishop and the diocesan bodies did not break Ontario laws in removing the board members. With the verdict the Diocese of Canada, as a hierarchical Church, was given the right to define the manner of administering and managing church property, which, at the gathering in Windsor, was deemed of far ranging significance for the the life of the Orthodox church in Canada.

This year once again the assembly worked in five committees and at the plenary session on the last day the decisions were adopted which would manage the church school congregations and parishes in the upcoming period. From the work of the missionary-educational committee the decisions which stand out are the decisions of the improvement of the work of the church schools and Serbian schools a the diocesan parishes and the continuation of the series of seminars for church school teachers. The publication committee determined the work of “Istocnik” this year. The legislative committee dealt with the issues related to respecting the Statutes of the Diocese regarding taking oaths and its fulfillment as well as ways of support for the eventual problem our churches in Canada might face in defending the definition of marriage. At the suggestion of the financial committee the Assembly accepted the 2014 budget and the letter to His Holiness Patriarch Irinej of Serbia which was given by the committee for greetings and resolutions. All members of the assembly signed this letter.

This was an election year for the Diocesan Council whose mandate lasts three years. Elected to the Diocesan Council were: Francois Arsic from Montreal (Vice President), Jovan Krstic from Ottawa, Dragan Prostran from Oakville, Dr. Goran Stanisavljevic from Vancouver, Vojislav Vukovic from Hamilton, Radovan Gajic and Vidoslav Sestic from Toronto. Bishop Georgije declared the long reigning president of the St. Demetrios Church in Windsor, Zarko Vucinic, as honorary Vice President of the Diocesan Council and thanked him for all that he has done for his church, the diocese of New Gracanica to which this parish belonged until 2009 and now the Diocese of Canada.

This year's hosts, led by their priest Fr. Jovica Cetkovic and president Zarko Vucinic, succeeded in everything. Particularly memorable was the prayerful gathering at the St. Demetrios church, the Invocation of the Holy Spirit on Friday, February 7, which began the Assembly, the Vespers on Friday and Saturday and the Holy Hierarchical Divine Liturgy which concluded the Assembly on Sunday.

On Saturday the Holy Hierarchical Divine Liturgy was served at the other Serbian church in Windsor, the Dormition of the Most Holy Theotokos, where the members of the Kolo Sestara warmly welcomed all the guests and prepared a lunch. The assembly participants were greeted by Petar Dobric.

The bishop and and clergy attended one more beautiful Serbian affair in this city before the conclusion of the assembly: the St. Sava celebration organized by the Serbian school “Nikola Tesla”. Attending this event were 350 faithful, parents and children, firm in their intentions of preserving the Serbian language and traditions. This school belongs to the newly formed Windsor parish of St. Petka whose founding was sought for by 57 families.