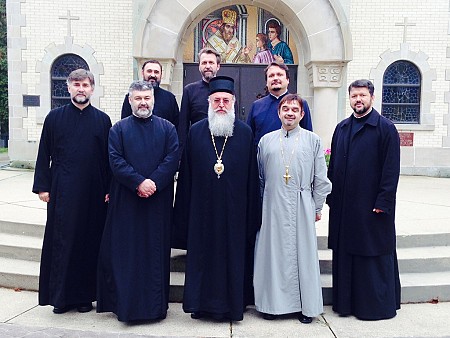 Libertyville, IL - On the eve of the great feast day of the Protection of the Most Holy Mother of God, on October 13th of this year, at the St. Sava Monastery in Libertyville, Illinois, the Clergy Brotherhood of the Serbian Orthodox Church in North and South America held its meeting. The brotherly assembly began with prayer, at noon, serving an Akathist Hymn to St. Nicholai of Zica and Ochrid. His Grace Kyr Longin, Bishop of New Gracanica – Midwestern American Diocese officiated. Following the service, Vladika addressed the clergy and all present with fatherly words, invoked God's blessing on all, and wished a successful assembly. In the monastery's dormitory a delicious lunch was served to the gathering of clergy, students of the School of Theology, and other guests.

The meeting of the Clergy Brotherhood, which began immediately following the meal, was very meaningful and lively. The clergy in brotherly love expressed their opinions on various topics and issues in the life of our Holy Church in our territory. Given that meetings of this kind were not held for a fairly long time, there were plenty of subjects for discussion and an exchange of opinions. Nevertheless, it was very pleasant to see the enthusiasm and desire of the clergy that the brotherhood continue its mission for the well-being of our Holy Orthodox Church and people. Father Dobrivoje Milunovic, president of the brotherhood, opened the meeting and expressed his gratitude to the clergy who participated. Twenty presbyters and one deacon were in attendance. The President particularly praised the newly elected board members, all of whom were in attendance, including those from the east and west coasts, as well as other far away states.

At the onset of the assembly, the clergy unanimously agreed for St. Nkolai of Zica and Ochrid be the patron of the Brotherohood. Although his holy relics were transferred to Serbia, his birthplace of Lelic, in 1991, part of the relics remained in the grave next to the monastery where he was originally buried. Thus the monastery of St. Sava, the spiritual center of the Serbian Orthodox Church in America, continues to keep the sacred tomb of Nikolai as he continues to protect the monastery and all of us gathered in and around it. The Brotherhood elected a committee to review and possibly amend its by-laws. Following the report of the Treasurer, ways of how to raise funds for the brotherhood were discussed so that the brotherhood could continue to help the education of seminarians and students of theology, widows of clergy, publishing and other charitable activities. The guidelines for scholarship grants were adopted, which the board of the clergy will follow, and which could be amended and/or modified in the future. Since the brotherhood annually publishes a calendar, discussion on this issue was particularly important.

An appeal was made to all clergy to promote the calendar in their parishes. Among other important issues, health insurance for clergy, especially younger ones who are serving in newly created and missionary parishes, the publishing activities of the brotherhood, continued education of clergy and other subjects were disscused. The assembly unanimously adopted the proposal of Bishop Maxim and the clergy of the Western American Diocese that the clergy seminar be held next year in Phoenix, Arizona, in the length of at least three days.

At the end of the day, as well as at the beginning, the gathering was continued with prayer, i.e. the festal great vigil on the occasion of the feast of the Protection of the Most Holy Mother of God, the patron of the New Gracanica Monastery. The next day, gathered around Bishop Longin, all the clergy concelebrated at the Divine Liturgy. As always, the celebration was prayerful and solemn, with the presence of a large number of faithful from all over, who were not prevented even by the rain to come under the Omophorion of the Mother of God. Someone remarked that there has never been so many clergy present. Glory be to the Mother of God on her gift!