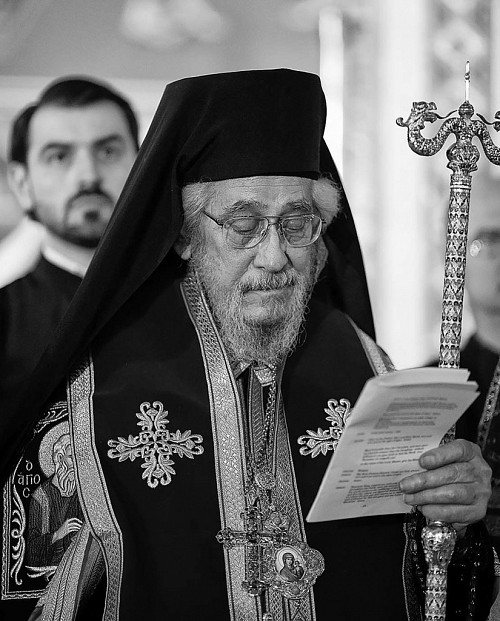 Marking the Tenth Anniversary of the Repose of Metropolitan Christopher

His Eminence Metropolitan Christopher (Kovacevich) of the Libertyville-Chicago Metropolitanate and Senior Hierarch of the Serbian Orthodox Church in North and South America, reposed in the Lord on the eve of the Great Feast of the Transfiguration, Wednesday, August 18, 2010.

For most of his 60 years of devoted service in the Serbian Orthodox Church, Metropolitan Christopher labored as a priest, counselor, youth worker, administrator, educator and bishop before becoming spiritual leader of the Church in the Americas.

Metropolitan Christopher was known for his efforts in helping Serbian parishes become bilingual in their worship and educational programs. What formally began in 1921 as a Church of Serbian immigrants, he helped integrate into American culture and life

His Eminence was born on December 25, 1928, in Galveston, Texas, the ninth of 12 children of Serbian immigrant parents, Petar and Rista Kovacevich, and was given the baptismal name, Velimir.

Upon graduating from high school in 1945, he attended what was then the newly established St. Sava Serbian Orthodox Seminary in Libertyville, Illinois, graduating in 1949.

In subsequent years, he continued his education and received a bachelors in philosophy and a masters degree in history from the University of Pittsburgh, as well as a  masters degree from Holy Cross Greek Orthodox School of Theology.

In Akron, Ohio, he met his future wife, Milka Raicevich, where he was attending the University of Akron. They married in 1951, and were blessed with four children, a daughter, Valerie, and three sons, Petar, Paul and Velimir.

He was ordained a priest in 1951 and given his first parish assignment at St. Nicholas Church in Johnstown, Pennsylvania. In 1954, he became parish priest of St. Sava Church in Pittsburgh.

In 1962, he and his family moved to Chicago, where he became parish priest of St. Archangel Michael Church.

As a priest in Western Pennsylvania and Illinois, he held the positions of secretary to the Central Church Council, Diocesan Director of Religious education, Director of Diocesan Summer Camps and Editor of two church journals and other publications.

In 1978, he made history by becoming the first American-born bishop to serve a diocese of the Serbian Orthodox Church in his native America. He was consecrated Bishop of the then Diocese of Eastern America and Canada, having assumed monasticism with the name Christopher.

In that position, he developed a diocesan-wide program in religious education and introduced computerization of all church administration and publications.

In 1991, the Holy Assembly of Bishops elevated the Midwestern American Diocese to the status of metropolitanate and elevated Bishop Christopher to the rank of metropolitan, and senior hierarch of the Serbian Orthodox Church, then of the United States of America and Canada.

Metropolitan Christopher also served as Dean of the St. Sava Serbian Orthodox School of Theology, which was re-established in 1986. He was instrumental in getting official recognition from the Illinois State Board of Higher Education for the school, which grants it authority to confer a bachelor of divinity degree.

Metropolitan Christopher faithful represented his Serbian Orthodox Church in pan-Orthodox, inter-church, governmental and diplomatic relations in the United States of America and abroad. He is remembered as a man of great moral fortitude, discipline and order, and mostly, a man of profound faith.

Memory Eternal to a beloved and exemplary hierarch of our Church!