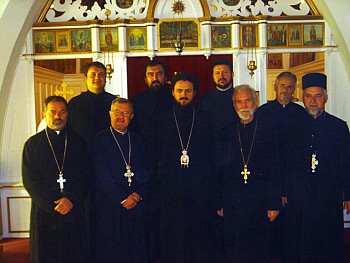 Fr. Dusan has traveled a storied journey since his birth in Sarajevo, Yugoslavia, April 25, 1928, the only son of Pavle Bunjevic and Zora Tomic Bunjevic. Because of his father’s profession as a Civil Engineer, most of his youth and growing up took place in Nis and Belgrade, though some years were also spent in Dubrovnik and Mostar. He graduated from the 6th Belgrade Gymnasium in 1951; four years behind his normal class year due to imprisonment by a regime that punished people on flimsy grounds just as a matter of course.

Following three years of study from 1951 to 1954 of Theology and Philosophy at the University of Belgrade, Father Dusan defected to Greece as a political refugee. There he received a two-year scholarship to the Saint Serge Theological Seminary in Paris, France.

By 1956, with a Certificate of Divinity in hand, he landed in Chicago. Two years later, on February 2nd he married Ljiljana Selakovic. His first church assignment was in 1960 to organize and become Superintendent of the Sunday and Serbian Schools for St. Sava Serbian Orthodox Church in Gary, Indiana. That same year, Mama Zora, Father’s mother, came to live with her son until her death in 1994.

Under Father’s spiritual leadership, many special events took place in the parish. One in particular to remember is the construction of the parish home, which was dedicated to the glory of God on June 4, 1966, and with the unremitting labors of the parishioners and sisterhood, the parish home mortgage was liquidated on November 28, 1982. 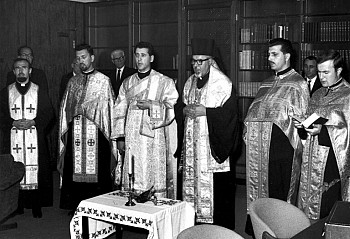 Father Dusan, in addition to his formal education abroad, holds a Bachelor of Science Degree in Liberal Arts and a Master of Arts Degree in History from the University of San Francisco.

Fr. Dusan retired from his parish in November of 1999, following 35 years of dedicated service. Shortly after his retirement, Fr. Dusan was appointed administrator of St. George Serbian Orthodox Church in Oakland, California.

He was a good organizer and helped to improve many aspects of the church, cultural and national life of the parish.

Since his arrival in California in 1964, his dedication to our youth was exemplified by his total devotion to the St. Sava Serbian Orthodox Church Children’s Camp in Jackson, California. His overall supervision of the camp has contributed immeasurably to its success.

Fr. Dusan reposed in the Lord in San Francisco, CA on December 24, 2020. He is survived by his lovely wife Protinica Ljiljana; sons Dejan and Pavle; daughters-in-law Danica and Vera; grandchildren Jovan (Jelena), Matija (Lindsay), Dusan, Sanja, and Vladan; great-grandson Miles; many Kumovi; and family in Europe.